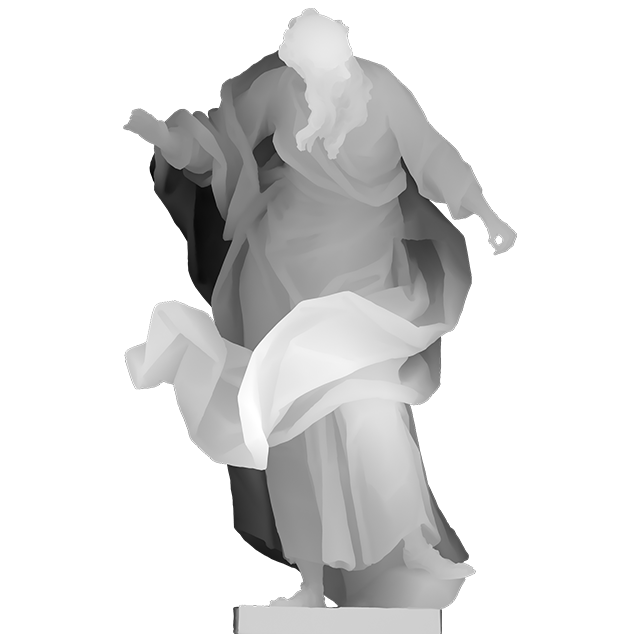 The sculpture comes from the altar of the Church of the Holy Trinity of Trinitarian Order in Lviv (reconstructed after 1748 by architect Bernard Meretyn), later it was moved to the Church of St. Martin in Lviv (built in 1739-1745). The sculpture was created in 1757.

The modelletto was carved in an incredibly detailed and meticulous way. The head, hands and feet were created in the style of jewellery miniatures.

Characteristic features of the sculpture include the motion and dynamics of the symbolically unfolded arms, a large forehead and a face full of dignity. The garments are carved expressively, planarly and geometrically. The drapery folds are deep and ribbed, they are alternating rhythmically. The arms and torso show the anatomy of the figure through the garment. Only the cloak of the saint is expressively fluttered by the visually fixed blow of the wind.

In this work, Pinsel conceals his favourite themes of knotted arms and muscular legs. Internal tension is seen in the construction of the head: deeply planted convex eyes, a dramatic nose and an disheveled beard. To convey his idea more expressively, the author draws realistically and colourfully on the exposed parts of the body and decorates the vestment with gilding. This approach to the portrayal of St Joachim shows how perceptive Pinsel was while creating the figure of the earthly grandfather of Jesus Christ, the father of the Virgin Mary and the husband of St Anne.