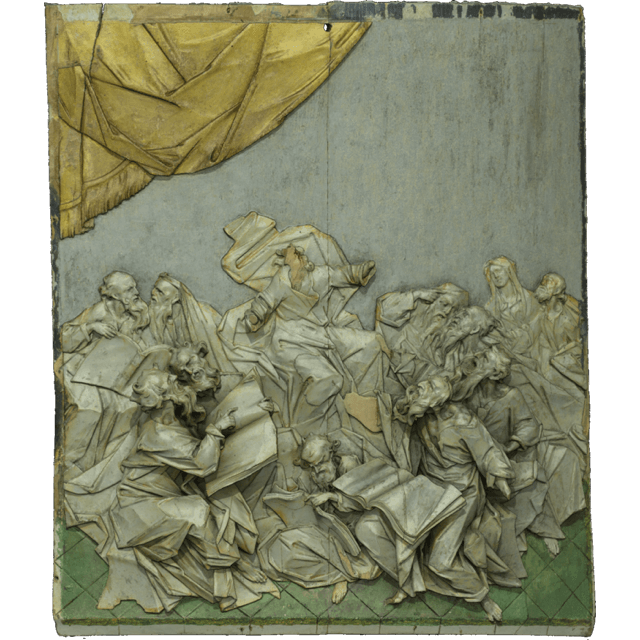 Johann Pinsel created the relief for the ambon of the Church of All Saints in the village of Hodowica in 1758. The church was designed by architect Bernard Meretyn.

Description of the sculpture

In the relief composition “Twelve year old Christ in the Temple”, the figure of the Messiah is placed at the intersection of the diagonals of the wooden plinth. The author has placed the eight Jewish teachers in the shape of an arc in the lower half of the work. To the right, behind the teachers, you can see St Mary and St Joseph. On the upper corner on the left there is a pulled back gilded curtain.

Jesus is seated and addresses the teachers with his hands spread. Today Christ’s face and palms are missing. One part of the Jewish teachers listens to him attentively. Others peer into the open Holy Books, looking for answers and interpretations. Johann Pinsel has depicted the saints Mary and Joseph at the moment of the Finding of the twelve-year-old Jesus: their faces are happy and uplifted.

The author based the relief composition on a strict geometric structure. Pinsel carved the beards and hair of the Jewish teachers in a dynamic and expressive way. In modelling the folds, he applied the techniques of delicate tracing inherent in icon paintings of old Rus’. A pulled back curtain invites the viewer to think over the fifth mystery of prayerful contemplation – the Finding in the Temple.

The relief composition “(Twelve year old) Christ in the Temple” was preceded by a similar work from the church in Horodenka. Both works were placed in the central arched space of the ambon. In Horodenka its ideological content was intensified by the figures of four evangelists on both sides. In Hodowica sculptures of prophetesses Miriam and Anna were used. Both reliefs bear a striking resemblance and the accuracy of the depicted events. On the reverse side of the relief from Hodowica there is an inscription in Latin “Bernard Meretyn” and the architect’s wax seal with the letters “B” and “M” in the corners. This is the last known lifetime signature of the architect on his completed work.