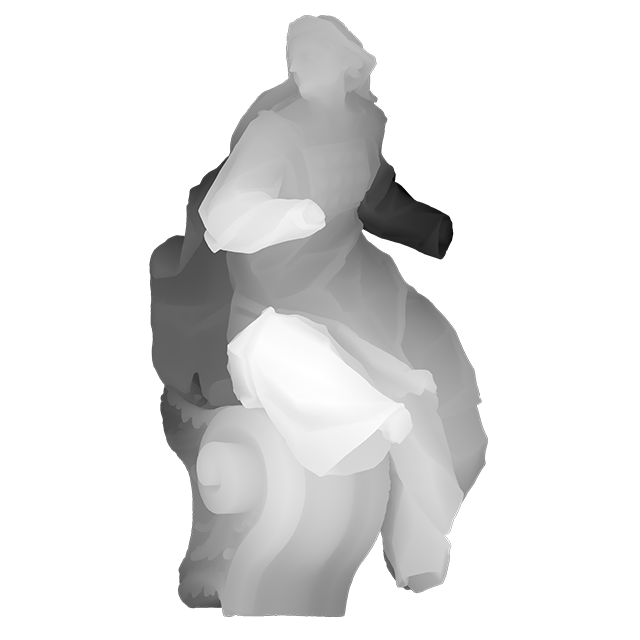 Johann Pinsel created the sculpture for the ambon of the Church of All Saints in the village of Hodowica in the end of 1758. The church was designed by architect Bernard Meretyn.

The prophetess Miriam’s head is tilted back, her hair is neatly gathered under the cape. Her face is peaceful, her eyes wide opened. Her arms are outstretched and her right leg is bent, resting on the volute of the bracket. Characteristic features of the sculpture are face and hair highlighted by colours. The author carved the dress along the curves of the female body and actively emphasized the edges of the folds. The dress, the bracket and the rocaille were gilded.

On the chest of the prophetess Johann Pinsel has carved a hoshen – a quadrangular breastplate with twelve jewels. The ornament indicates her notable origins: Miriam was the older sister of Aaron and Moses. The sculptor Pinsel and the architect Meretyn conceptually placed the figure of Miriam the saviour and progenitor on the ambon. The way that they established gender equality in the symbolic interior of the church was quite bold for that time. In early twentieth-century photographs Miriam was holding the Tablets of the Law – two pieces of stone inscribed with the Ten Commandments. Today the palms, sandaled feet and Tablets are missing.

The intellectual meaning and vividness of the sculptural composition is similar to Michelangelo Buonarroti’s frescoes in the Sistine Chapel, especially the images of the Sibyl prophetesses. This confirms that Johann Pinzel visited the Vatican.