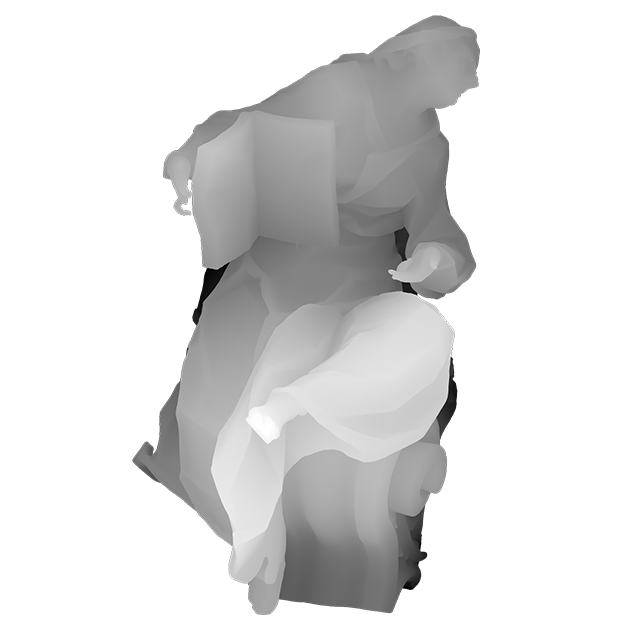 Johann Pinsel created the sculpture for the ambon of the Church of All Saints in the village of Hodowica in the end of 1758. The church was designed by architect Bernard Meretyn.

The prophetess Anna’s head is tilted back, her face is deep in thought, her lips are eloquent. Her hair is neatly gathered under a cape. Her right hand holds an opened book. Her left leg is bent, resting on the volute of the bracket. She is wearing sandals. Characteristic features of the sculpture are face, hair, feet and palms highlighted by colours. The author carved the dress along the curves of the female body and actively emphasized the edges of the folds. The dress, the book, the sandals, the bracket and the rocaille were gilded.

The prophetess Anna was the second person to meet Jesus in the temple at the time of the Candlemas. Johann Pinsel drew the attention of the laity to the first Christian missionary by placing the Holy Gospel in her right hand. On Anna’s left hand, the ring finger and little finger are bent. This brings to mind the Catholic custom of making the sign of the cross before reading the Holy Gospel.

The artist placed the sculptures of the two prophetesses next to the relief in an unusual and bold way. Traditionally this would be a location of the four Evangelists. In Hodowica, however, the sculptural composition allowed every viewer despite their gender to reflectively become a participant of the act.

The author framed the words of Scripture with visual signs. The perception of the theatrical sculptural production was dictated by an emotional insight into human problems. The symbolism and expressiveness of Anna and Miriam’s sculptures gave rise to the creative pursuits of the late twentieth and early twenty-first centuries in the direction of performance, actionism and “happening”.

The intellectual meaning and vividness of the sculptural composition is similar to Michelangelo Buonarroti’s frescoes in the Sistine Chapel, especially the images of the Sibyl prophetesses. This confirms that Johann Pinsel visited the Vatican.