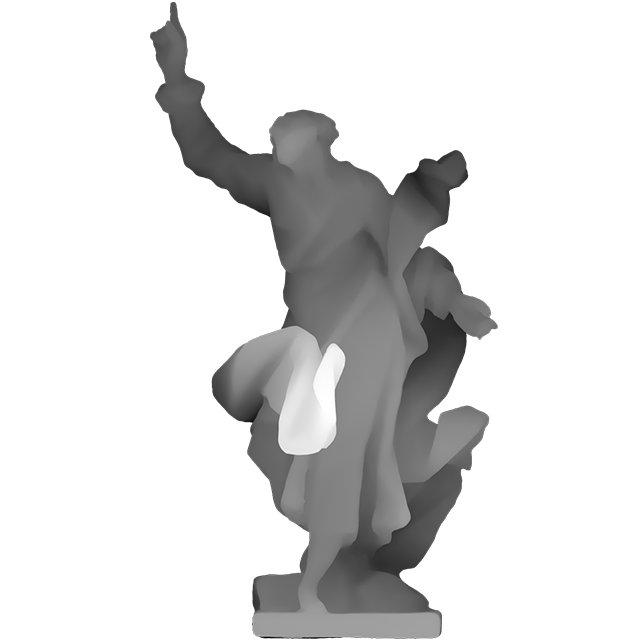 Bozzetto “​​Prophet Abraham” was part of the wooden model of the side altar of the Church of the Assumption of the Blessed Virgin Mary in Monastyryska. Johann Pinsel created it in 1761.

Johann Pinsel carved the bozzetto in a tense, emotional and vertical fashion. The head is turned and tilted in his characteristic dynamic manner. The Prophet Abraham’s two arms are spread diagonally, his legs are firm and slightly raised. His attire is generalised and has pointed folds. The cloak partially covers his legs and hangs down his back. The head and hands are carved into the wood in a realistic and clear manner.

Johann Pinsel created the bozzetto of the Prophet Abraham in a proportional and spatially appropriate manner, taking into account the interior of the Church of the Assumption of the Blessed Virgin Mary in Monastyryska. The miniature is different from the large sculptural composition on the altar: Johann Pinsel may have made some conceptual adjustments while he was working on it. Mounting Abraham in the side altar opposite the sculpture of King David was an unusual decision. The Prophet Abraham is one of the three spiritual forefathers of all humanity in Judaism, Christianity and Islam. Consequently, his figure visually represents Johann Pinsel’s ecumenical worldview and religious beliefs.

On the base of the plinth of the bozzetto there is an opening from the mounting of the figure to the general architectural composition of the model of the side altar. Unfortunately, the current location of the model is unknown.