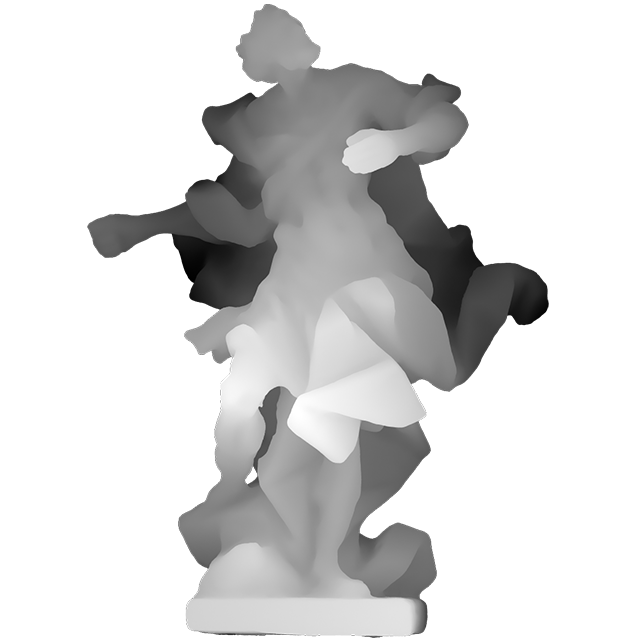 Bozzetto was part of the wooden model of the side altar of the Church of the Assumption of the Blessed Virgin Mary in Monastyryska. Johann Pinsel created it in 1761.

The author has carved bozzetto in a dynamic and dimensional manner. The body, head, arms and legs of the design are influenced by examples of ancient sculpture.

The head of the figure is turned and bowed to the left with a raised chin, the left arm is curved and the right hand is drawn to the side. The attire on the body is calm and yet it preserves the plasticity of the perfect build of the human body. The folds of the cloak are triangular and pointed, partially covering the lower leg and waist and fully protecting the character’s back. The head, arms and legs are created physically and are sensually tense. In the fist of the right hand, there is a noticeable hole: it used to contain a sceptre, a symbol of power.

Johann Pinsel carved the bozzetto of King David as an organic and integral part of the model of the side altar of the Church of the Assumption of the Blessed Virgin Mary in Monastyryska. The miniature differs from the large sculptural composition in the dynamics of the turning of the hands: the author made conceptual adjustments while working on the piece.

The sculptor has carved the bozzetto of King David respecting the anatomical proportions of the human body, emphasising its perfection. This, as well as his use of ancient armour and the figurative concept, suggest that Johann Pinsel’s work was inspired by the work of the sculptor Nicolas Cordier (1565-1612) “King David” which is located in the Basilica of Santa Maria Maggiore in Rome. At the base of the plinth of the bozzetto are a hole and a wooden pin from the mounting of the figure in the general architectural composition of the model of the side altar. Unfortunately, the current location of the model is unknown.