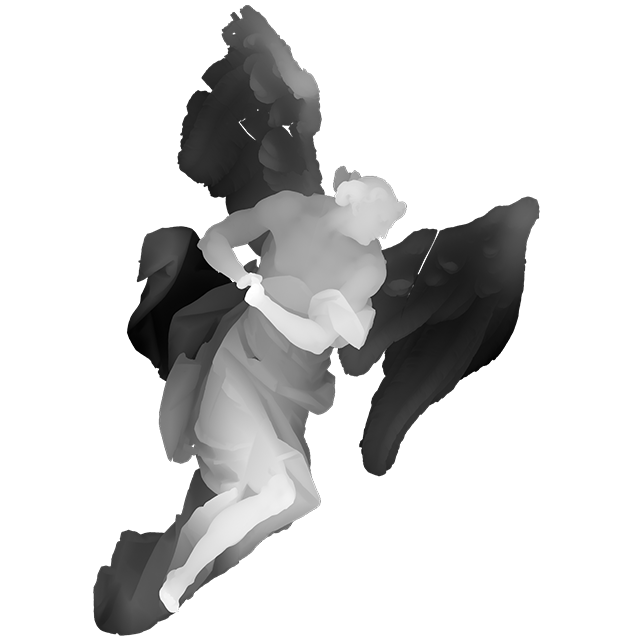 The sculpture comes from the high altar of the Missionary Fathers’ Church of the Immaculate Conception of the Virgin Mary in Horodenka. Johann Pinsel created the sculpture in 1752-1755. The church was built during 1745-1769 according to Bernard Meretyn’s design.

The head of the Angel sculpture is peacefully bowed to the left, his eyes are thoughtfully opened. His naked shoulders are expansive and veiny, his hands are folded in prayer. His right leg, with an apparent knee, is pulled to the side and frozen without touching the surface of the floor. The left leg is hidden behind the angel’s clothing: it is not visible. Two powerful wings with elaborately carved feathering are stretched in the air.

The sculptor has carved the garment with expressive deep stripes and fluttering folds. The vestments are light: the cloth is like a ray of light covering the angel’s body. Only the head with wavy hair, the arms, the chest and the right leg show the angel’s corporeality.

Fingers, fragments of the folds of the garment and the right wing of the statue are lost. As we know from old photographs, Johann Pinsel emphasised the angel’s essence by realistically and colourfully depicting the exposed parts of the body and hair, as well as gilding the garment.

Pinsel’s depiction of the angel is unusual. He gives him the signs of age at the edge of youth and maturity, of romanticism and sacrifice. The movement, the fine lines, the graphic nature of the cloth folds, the hands composed in prayer, the contrasting plasticity of the wings, the carefully carved hair and the angel’s posture resemble the works of Albrecht Dürer.