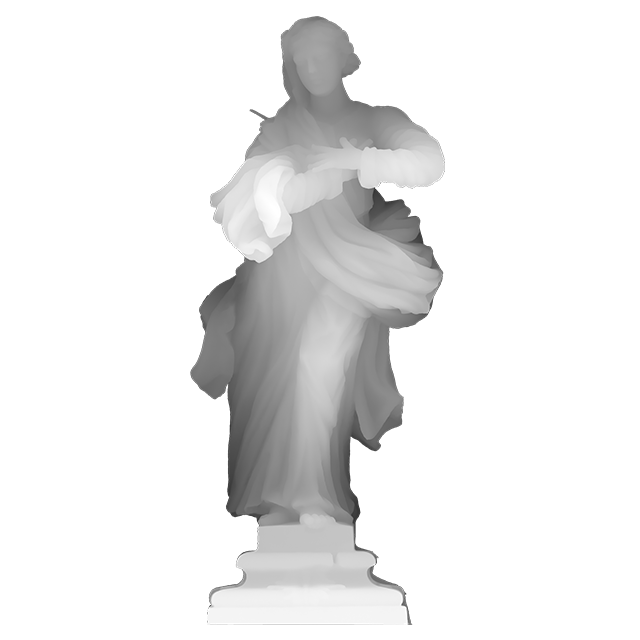 The white stone sculpture of the Virgin Mary is located on the column in front of the northern facade of the Missionary Fathers’ Church of the Immaculate Conception of the Virgin Mary in Horodenka. The church was built during 1745-1769 according to Bernard Meretyn’s design. Johann Pinsel’s authorship of the statue is in question.

The head posture of the sculpture of the Virgin Mary is static, the expression is calm and the hands are clasped to the chest. The author has carved the dress and the headscarf with hollows but no sharp edges or geometric planes.

The sculptor does not create comparisons of grotesquely carved wrists and head, nor does he emphasise the woman’s body with the turbulent rapture of the drapery, as Johann Pinsel did in his works. Mary’s clothing is simplified and her figure is imperturbable. The holes in her shoulders suggest a lost metal halo with stars.

The sculpture is placed on a corinthian column. Its capital is different from those on the facade of the church – there are no rocailles. The stylistic and compositional structure of the column, the proportions and the plastic characteristics of the cartouche with the coat of arms of the Pilyav, the small brackets and rosettes are all typical for the second half of the 19th century. The column isn’t depicted in the von Mieg map from the late 18th century.

In 1866, the church was restored under the supervision of a Count and art historian Mieczysław Potocki. It was likely his idea to build the column.